Hide Search
You are here: Home / Life / Traveling To Ilocos With A Toddler And An Infant 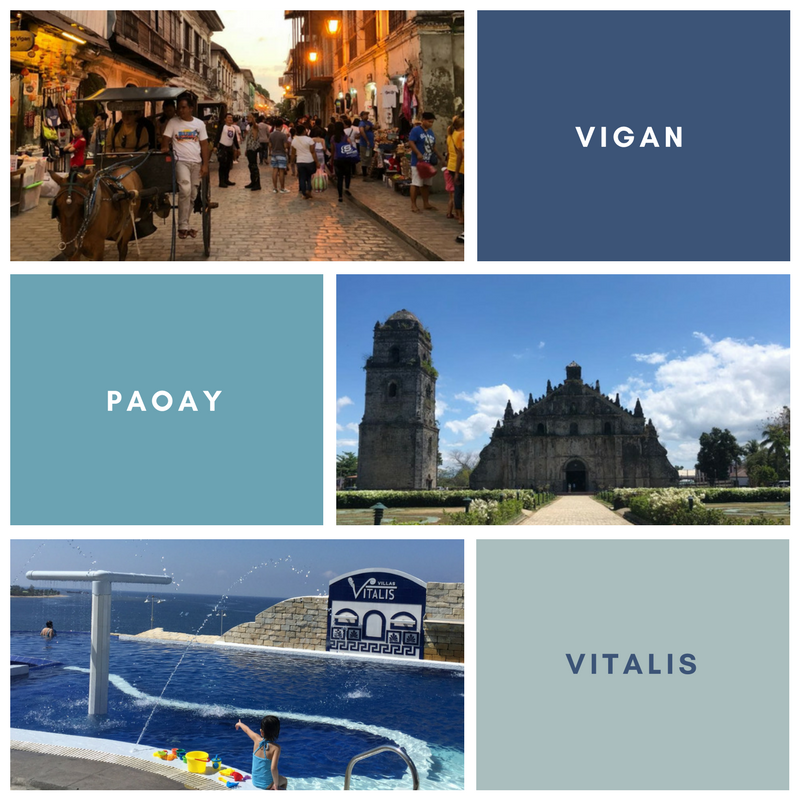 For one, this trip was farther than Baguio. Secondly, Siris was nothing like her sister as we were soon to discover. He fussed more. He pooped more.

But I didn’t want to accept that I could no longer travel or do what I please just because I had kids. So although traveling with a toddler and a baby can be more stressful than relaxing, I still said yes to it. I would endure and make the most of the travel. 🙂 #momgoals

Our first summer outing for the year took us (or drove us) to the northern part of the Philippines. We visited Ilocos Norte, more specifically the cities of Vigan, Paoay, Laoag. It may be a really long drive but my little ones have tried and tested this trip, and they enjoyed it. Or rather, the parents enjoyed. A little. 🙂 Not only did Light enjoy the places we went to and the things we did, but she also had fun during the car ride. So if you are planning a trip to the north with your toddler (and infant), this post can serve as your itinerary.

We left Manila around 3:30 am. Leaving at odd hours or during my LO’s sleeping/nap time had its advantages. Light wasn’t able to go back to sleep immediately but she wasn’t also full of energy. She and her baby brother were just quiet, if not, asleep most of the time. We had a couple of quick stop overs to stretch out and change diapers (Siris really enjoyed relieving himself in the car).

We arrived at Vigan a little over 2 pm. It was the perfect time because check in was around that time and we still had plenty of time to relax and explore the famous Calle Crisologo. 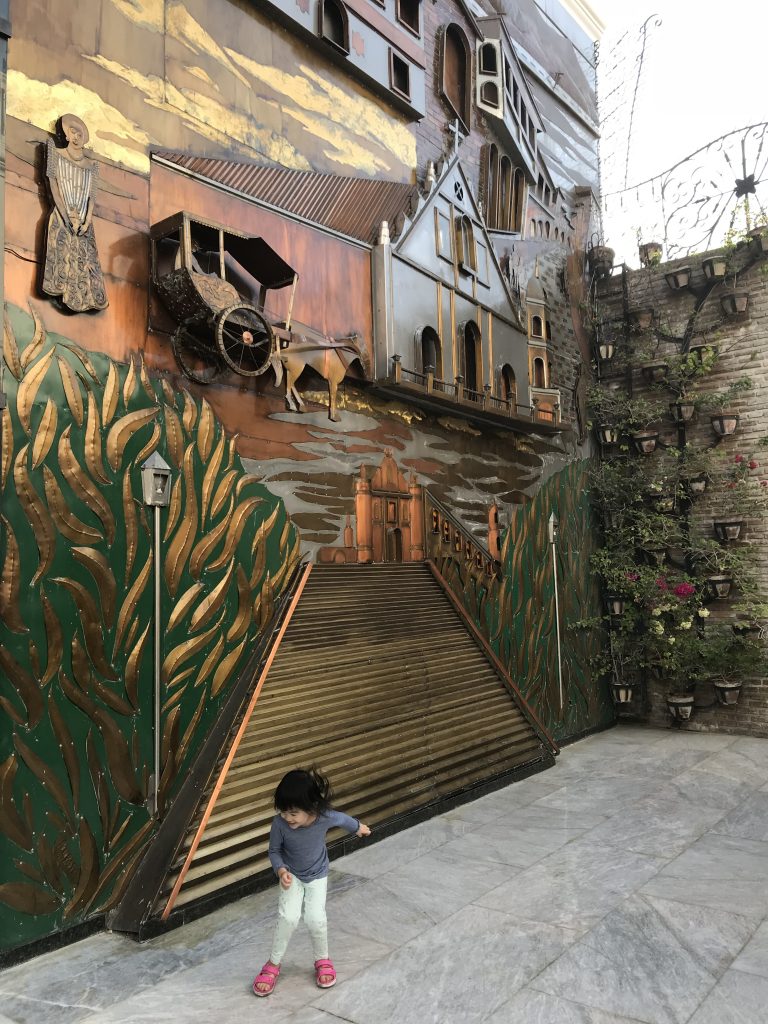 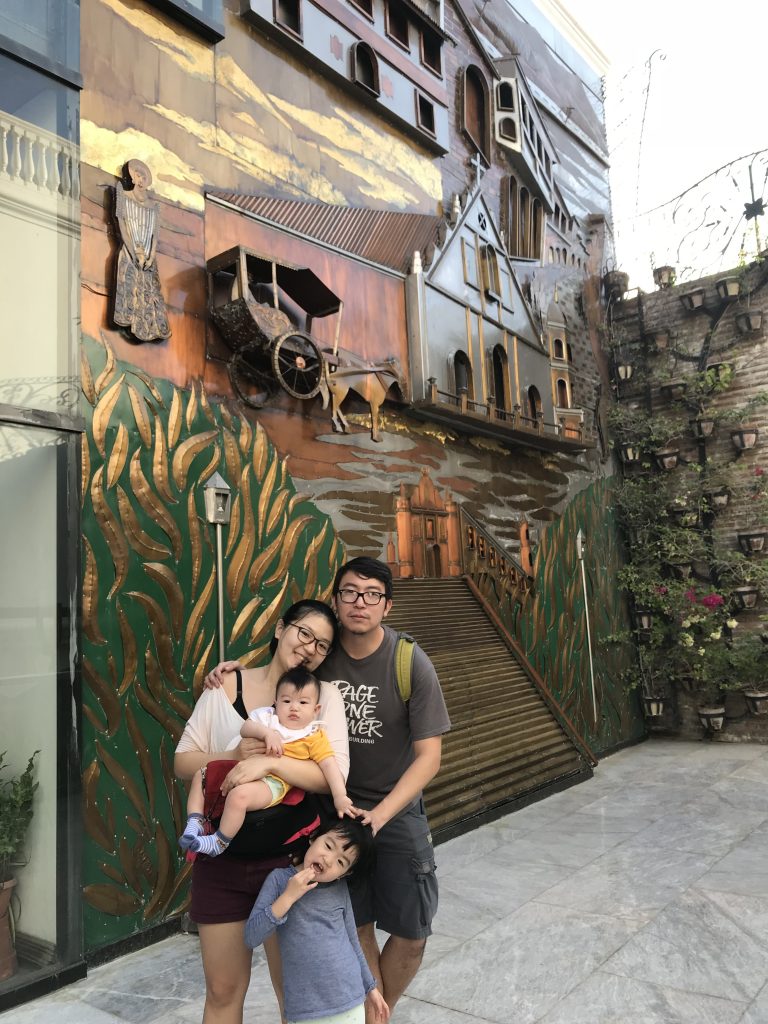 We stayed at Hotel Luna Annex. This is an extension of the original Hotel Luna, which had some of its areas under renovation. The rooms at the annex were cheaper compared to the main hotel, but they were still perfect for us because it had two queen size beds. Gone were the days when mommy and daddy can sleep together on one bed haha. We each had to take one kid to sleep with us. 🙂

Anyway, it was clean and spacious enough. My only protest would be the lighting. I feel like there was not enough lights in the room, or they were too dim. I had a hard time finding things (which you’ll tend to do a lot once you have kids). 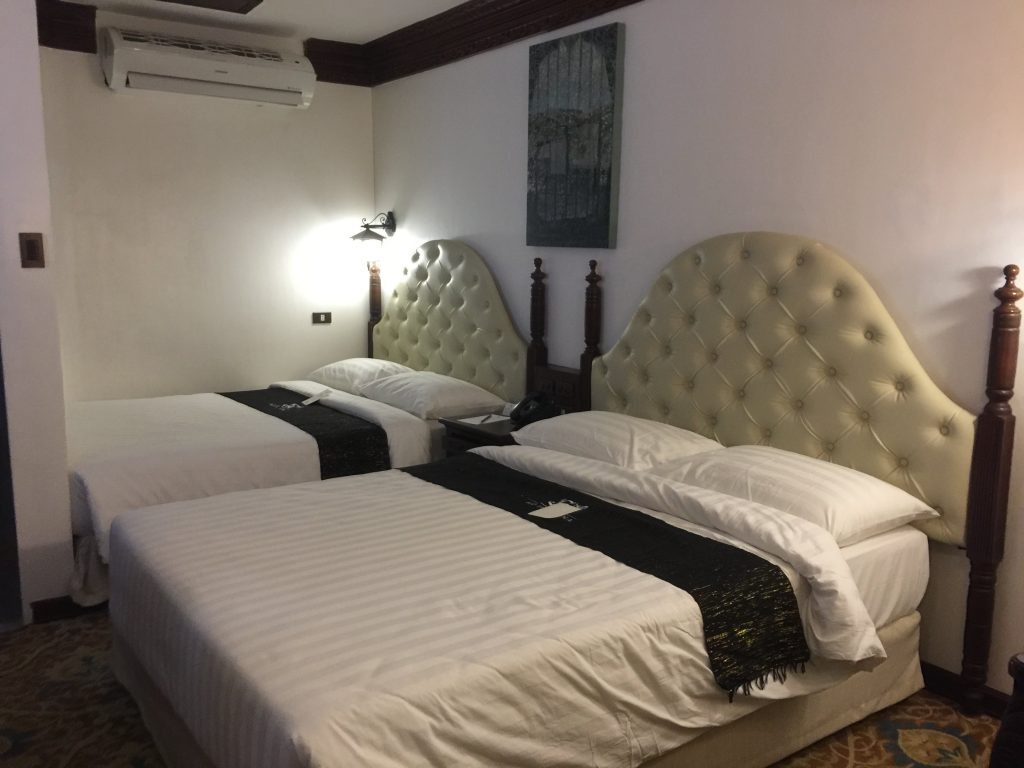 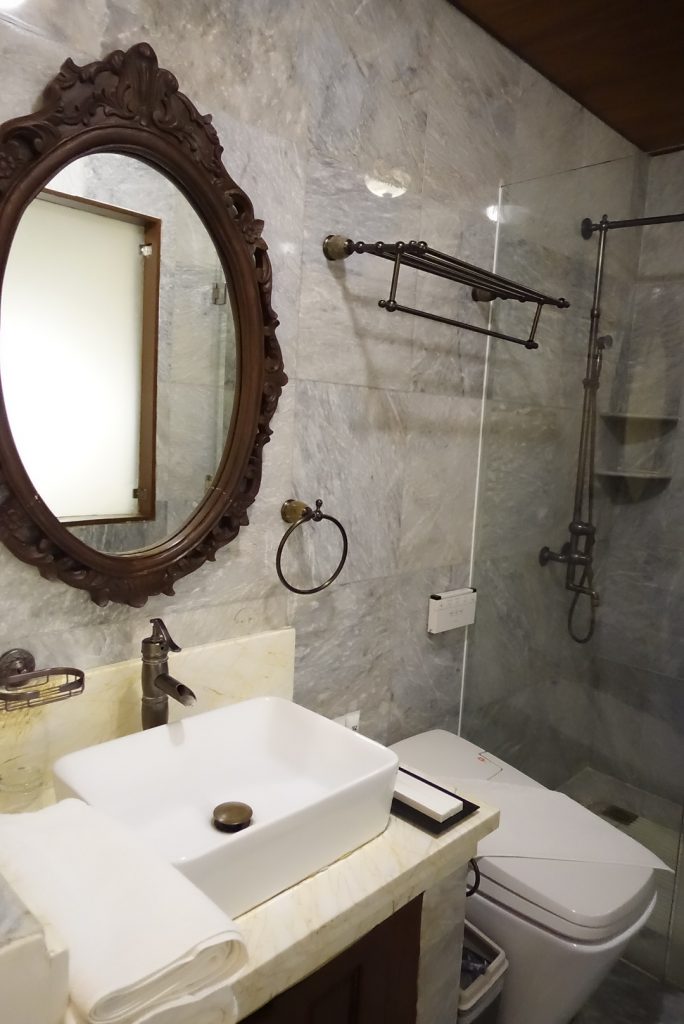 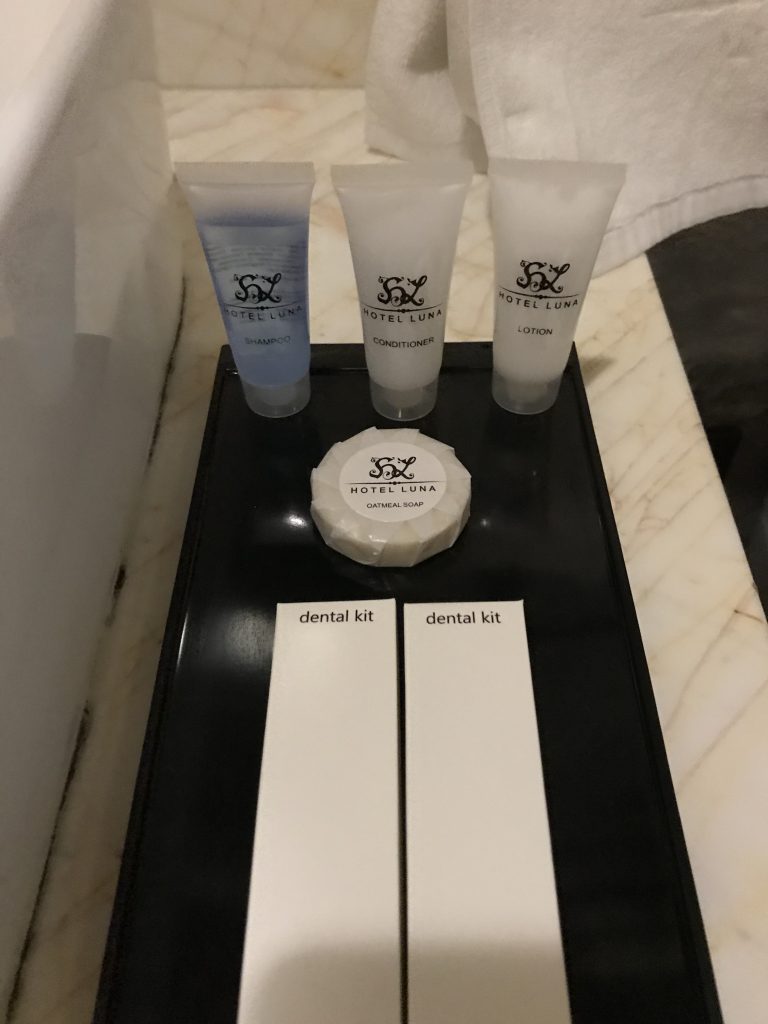 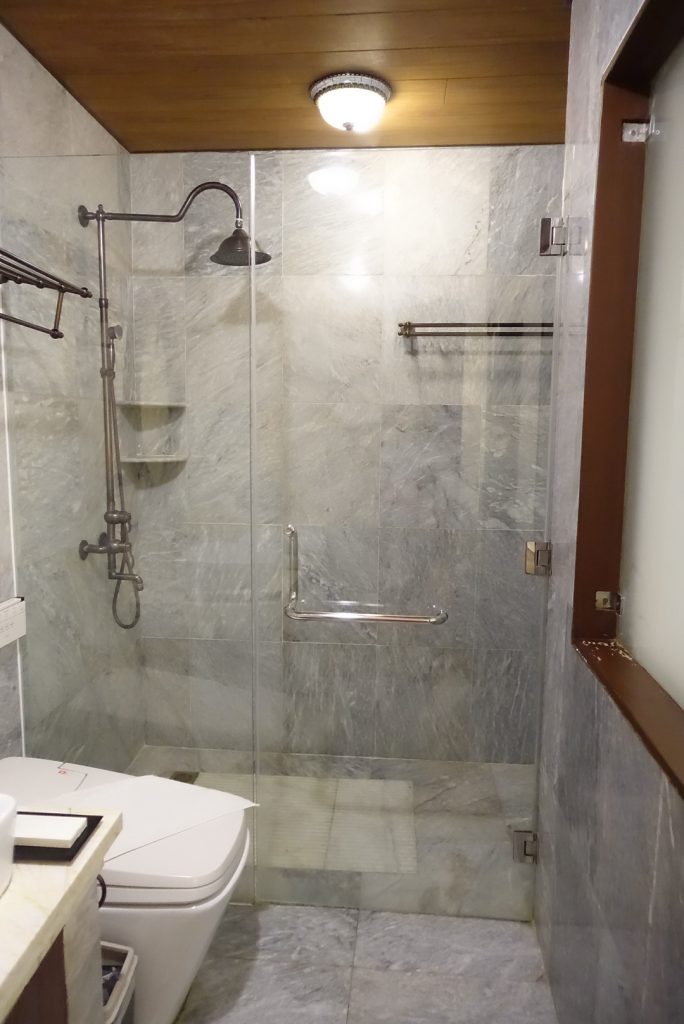 Breakfast, the complimentary drinks and massage that came with our booking were all done at the main hotel. The annex was literally for sleeping only, although the place had the same charms as the main hotel. Oh, how I would love to have been able to relax at the “sala” area, enjoy the old charms the hotel brought… someday perhaps. Right, mommas?!? 🙂 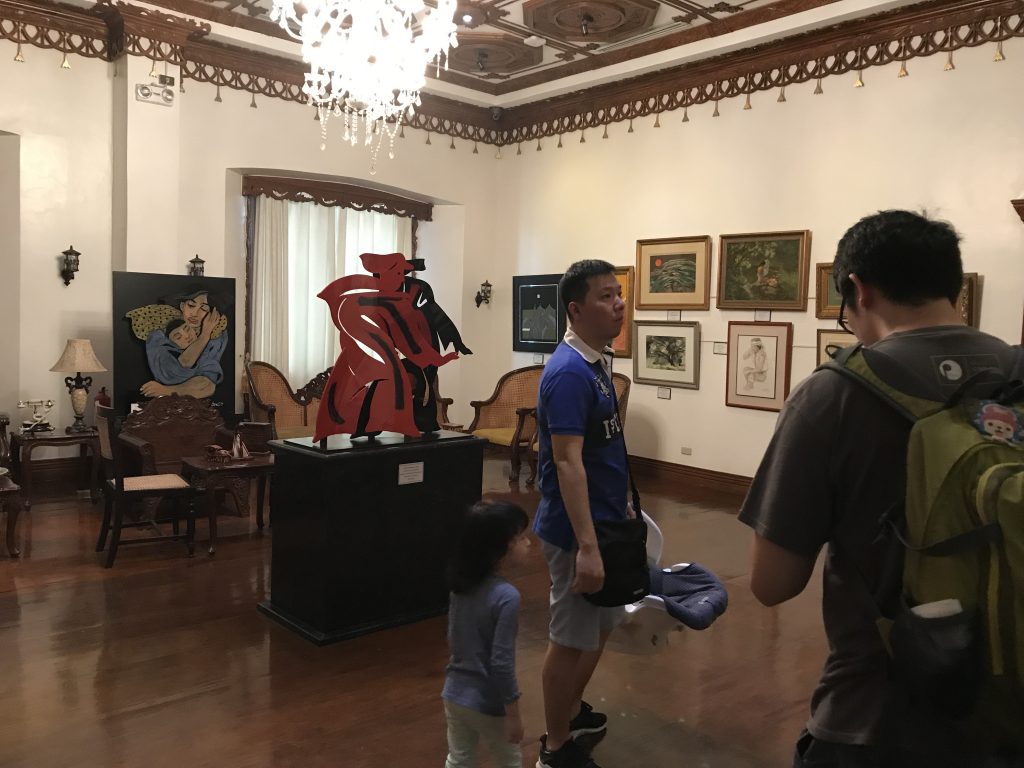 The free breakfast that came with our booking was a set meal. It had a generous serving. It came with a bowl of soup and a plate of fruits. Coffee, tea or juice was also included. If we wanted to upgrade our breakfast though, for 150 pesos we could join in on their breakfast buffet. The buffet spread was okay for the 150 pesos upgrade. We decided to get the set meal on our first breakfast so we wouldn’t be so full and since we’d be checking out another must eat restaurant for our lunch that day. Then we decided to get the buffet upgrade on our last day in Vigan and had a sort of brunch.

Almost everything was within walking distance from our hotel so after checking in we had a late lunch at Cafe UNO (must order: Poqui-poqui or the eggplant omelet). Then we had the kalesa ride (which some travellers suggested was best done during sunset). We went around the area and, of course, along Calle Crisologo.

The kalesa ride was 150 pesos for an hour for two adults. But if you are staying at Hotel Luna, they have their own more beautiful white kalesa which can fit 5 people for 300 pesos per hour. Had we known about this, we would have gotten it instead of taking 2 kalesas for the same amount. We wouldn’t have to wait that long too since it was already available at that time.

After our kalesa ride, we decided to rest for a while before heading out to have our late dinner. Unfortunately, we were dead tired and couldn’t get out of bed already or in my case, I just wanted to end the night early to have a well rested sleep and be fully energized the next day. The boys just went out and got us snacks (their famous empanada and okoy). We had “dinner” in the room just like what boring people with kids do when they travel with kids haha.

Paoay Church and Home of the Pinakbet Pizza

We had a full day ahead of us for our second day in Ilocos. We traveled further north. We visit the picturesque Paoay Church. We left at around 9:30 am or 10 am I think. By the time we got there it was already lunch time so we just took some photos, looked around the area and had lunch at another must eat place, which was just across the church, Herencia Restaurant. Of course, we ordered the Pinakbet Pizza, which was really good.

After lunch we had dirty ice cream. We got curious on what their dragon fruit ice cream tasted like. Not bad.

Malacañang of the North

If you want to know how the Marcos’ live before and the late president‘s accomplishments, this would be a good place to visit. Plus the restroom was clean so a good place to take a break. No tissue and soap though. 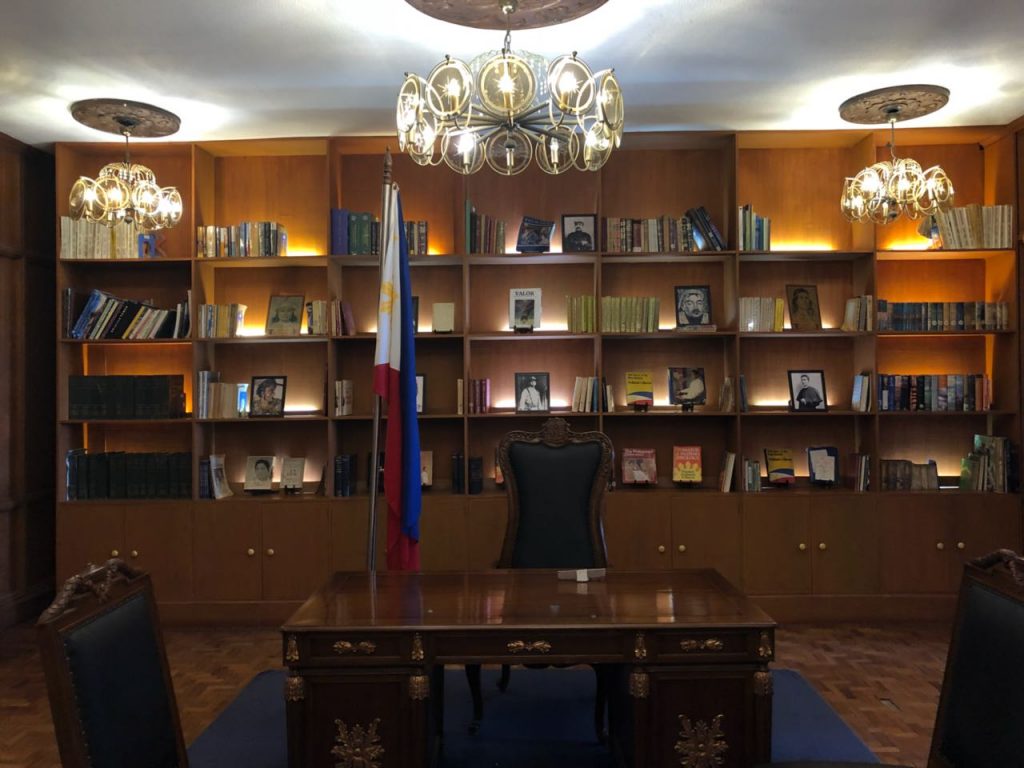 These places were a hit for Light. She absolutely enjoyed walking along the shore to see the rock formation (just plain rocks to her haha). From here we could already see the windmills, which were just amazing to look at. I found it really beautiful just looking at nature, hearing the water splashing against the rocks. It was a nice place to show light how beautiful is nature.

There is a paid restroom at the Kapurpurawan Rock Formation. Although not totally clean, it was manageable. I did let my little girl used the toilet. Tissue was provided and they had hand soap.

Since we already saw the windmills from here, we didn’t go to Bangui anymore. But it was supposedly just near Kapurpurawan Rock Formation so if you want to still check it out, it should be fine.

We still had Sand Dunes in our itinerary before heading back to Vigan. But since it was already late, we had kiddos with us (which were not yet allowed to experience it), and we already had a similar experience in Dubai, the group decided not to check it out anymore. We were behind schedule and we had a long way back to our hotel. We left the rock formation at around 5 in the afternoon. We were afraid to still be on the road super late in the evening, not knowing the area and all.

We arrived at Vigan a little over 8 pm. We had dinner at Cafe Leona, which had everything in their menu. They had Thai, Japanese, Italian and local food. It was interesting. There were still a lot of diners when we got there. They also had tables outside for those who want to have a more local, historic experience.

Our third day was a relaxing day. After our “brunch” buffet at the hotel, we took a last stroll at Calle Crisologo to buy some pasalubongs.

We checked out at 12nn and headed to Baluarte Zoo, which was near the area. This was our last stop in the city. The zoo had free entrance. Since it was really hot that time, we decided to ride the jeep to tour the place and see the animals. The ride, we had to pay. I think it was 50 pesos per person. I think the highlight of this zoo for Light was seeing an ostrich. 🙂 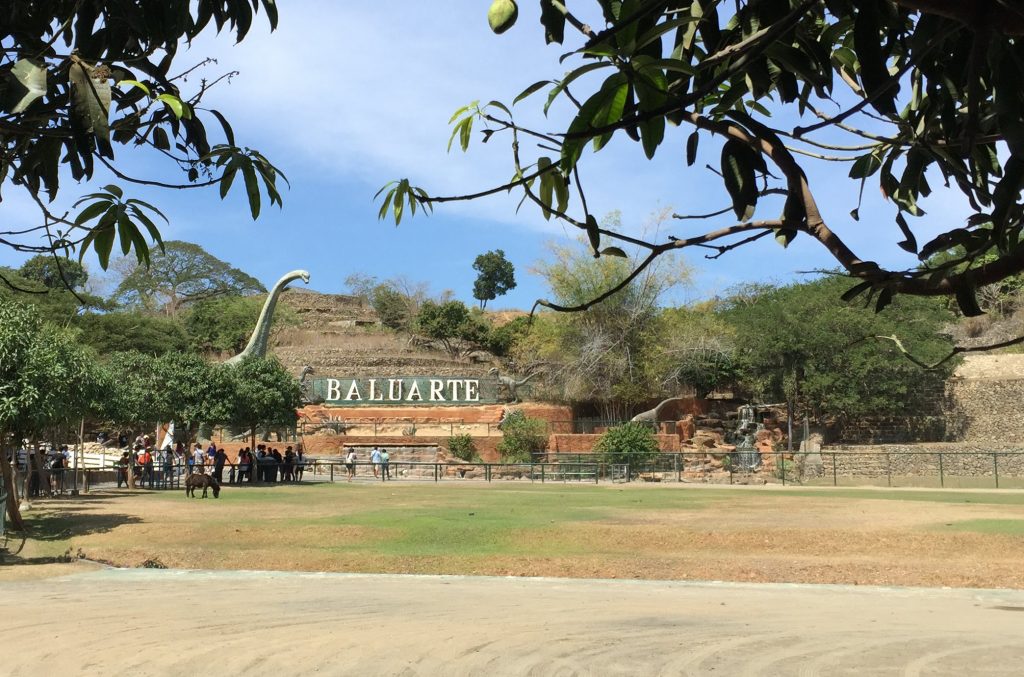 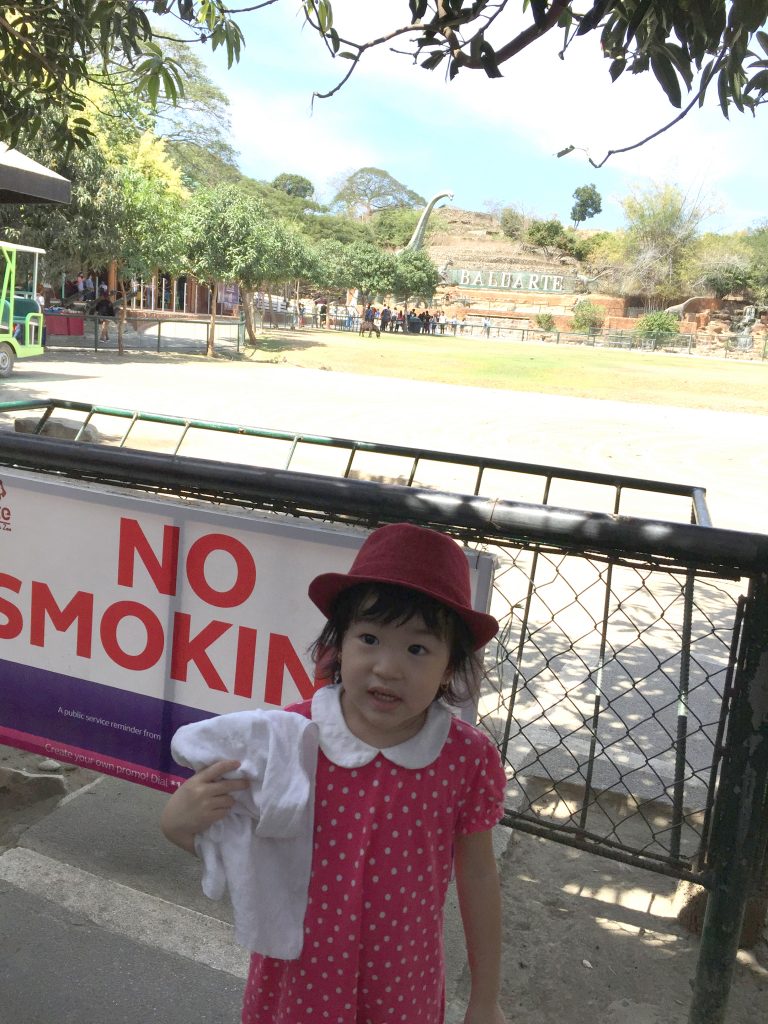 We also checked out Chavit Singson’s collection of animals he killed, called the Safari Gallery. I don’t really recommend this place because I don’t like the thought of kids like Light thinking it’s okay to kill animals for fun or as a hobby. Maybe it’s the mommy in me overthinking it. My husband said Light had no idea and thought they were fake. I mean I guess it was fun for Light seeing life size animals. But, yeah, will probably need to talk to her about it someday.

The Vitalis Villa Santorini of the North

The part of the trip I was most excited about. The part where we swim and relax. I realized that when you have kids, the best vacation really is where you can stay at one place, and where almost all activities are. 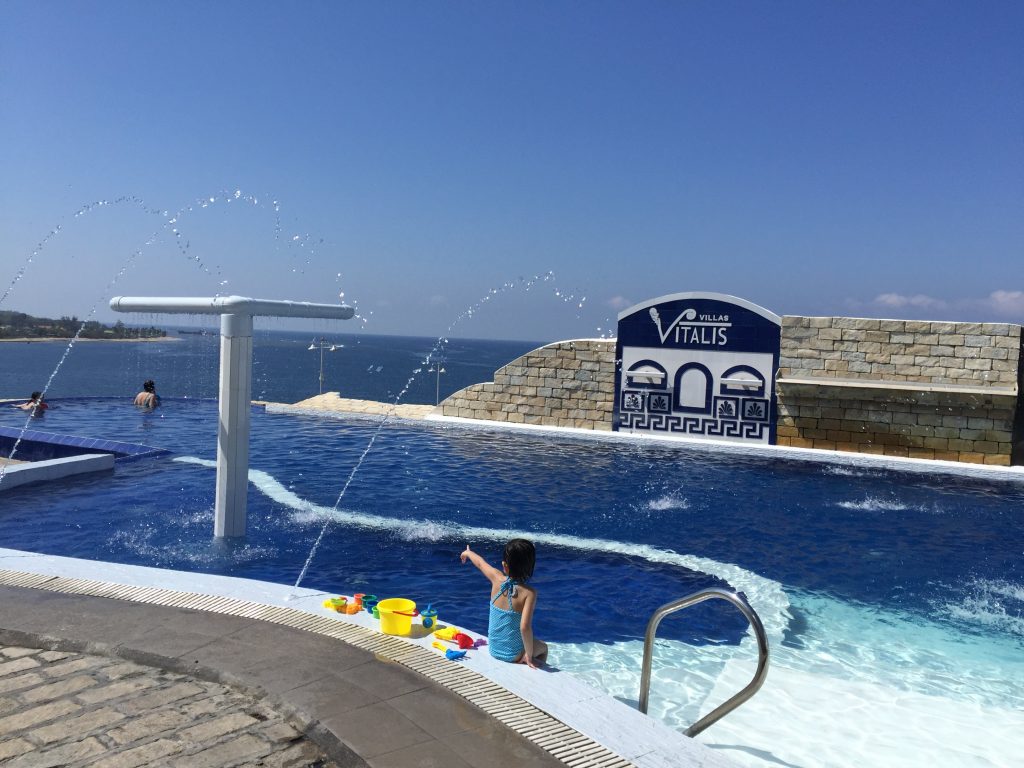 The Vitalis Villa was beautiful and instagram worthy. We got the 2 bedroom villa, which had 2 bedrooms with 2 queen size beds each. It was very spacious, with a common area and a dining and kitchen area. Perfect for families with kids. When we booked here, full board meals were included. They were all buffet styles by the way. I wish we stayed here for more than a night haha. Even though there was really nothing much to do. 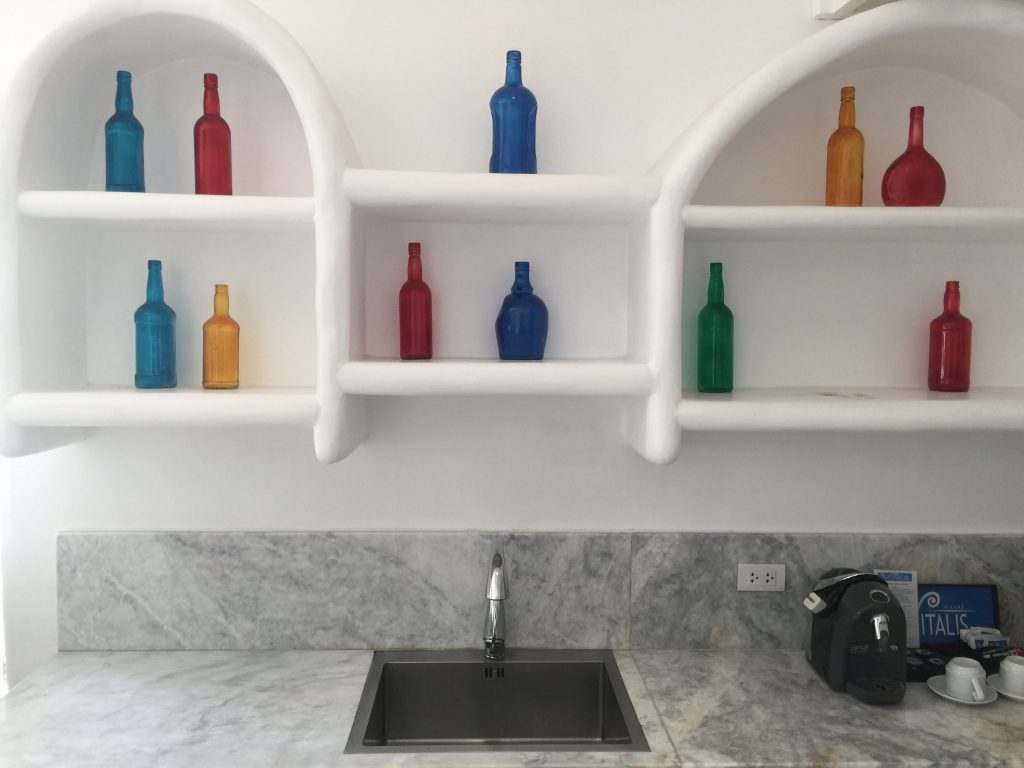 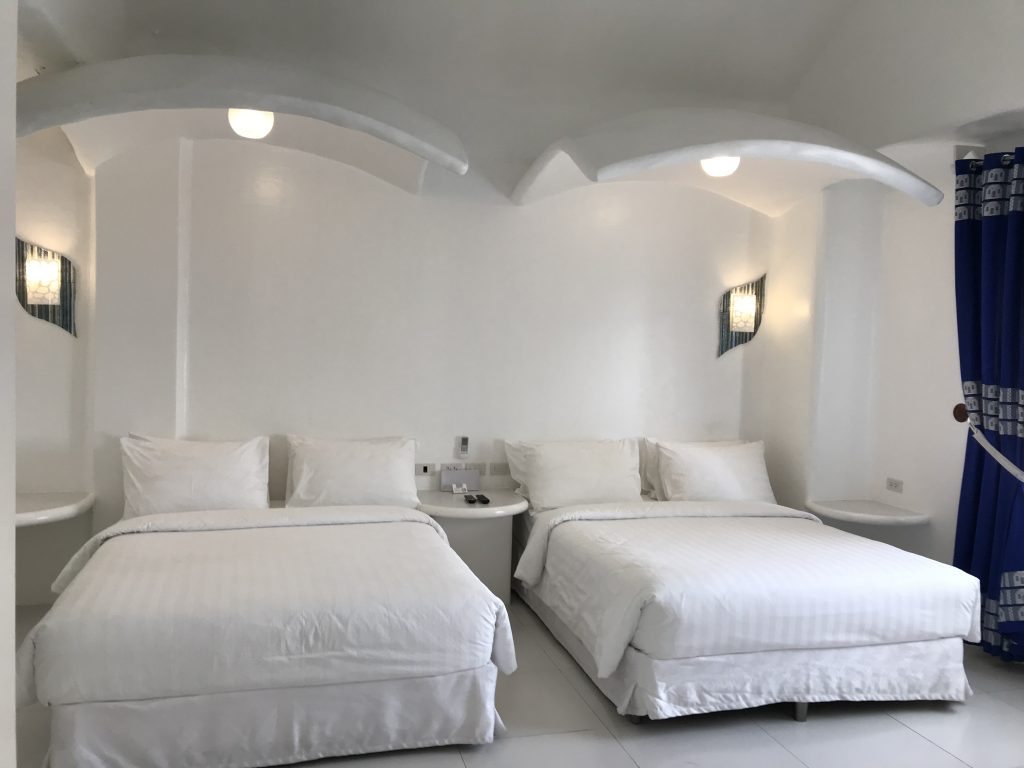 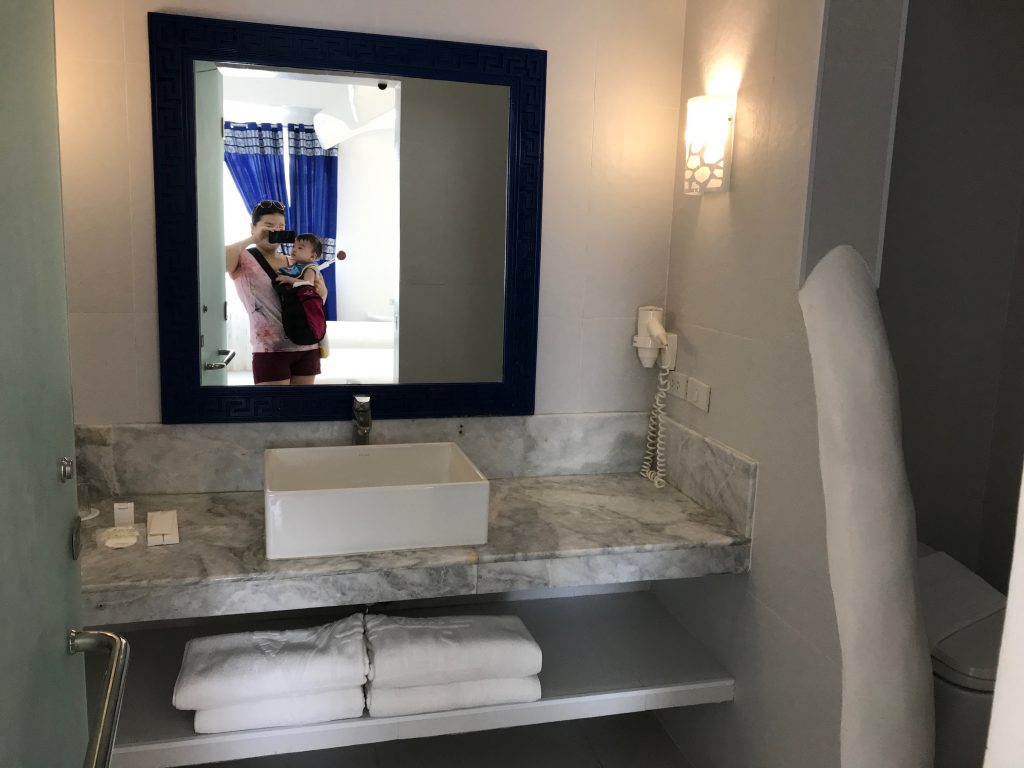 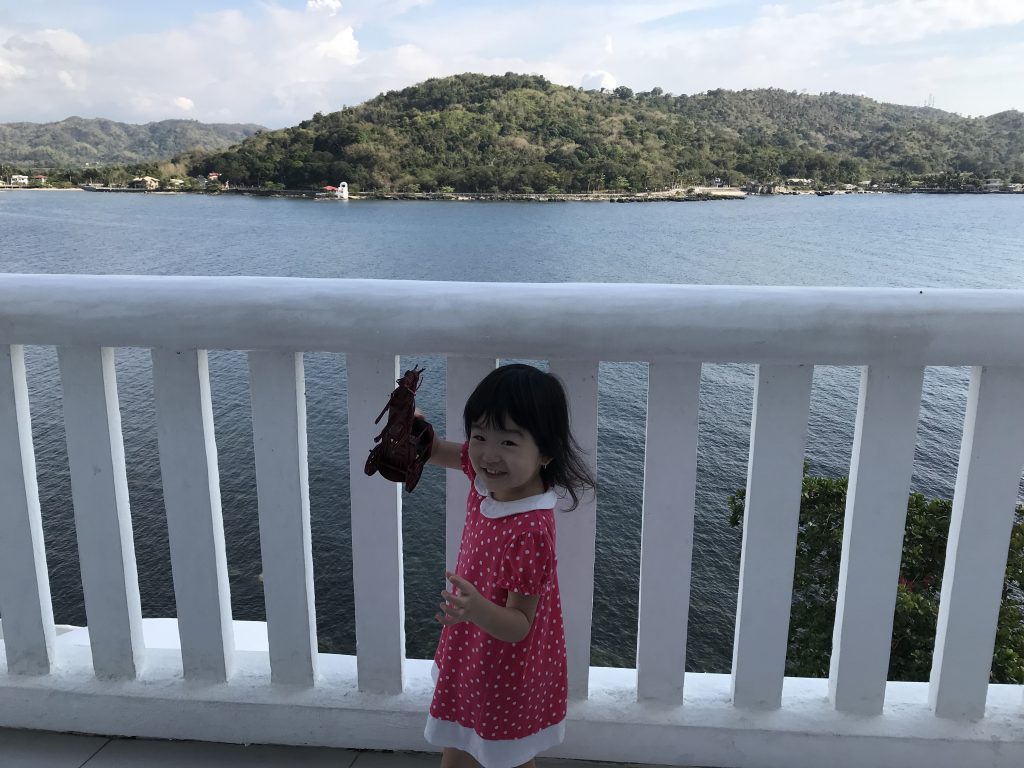 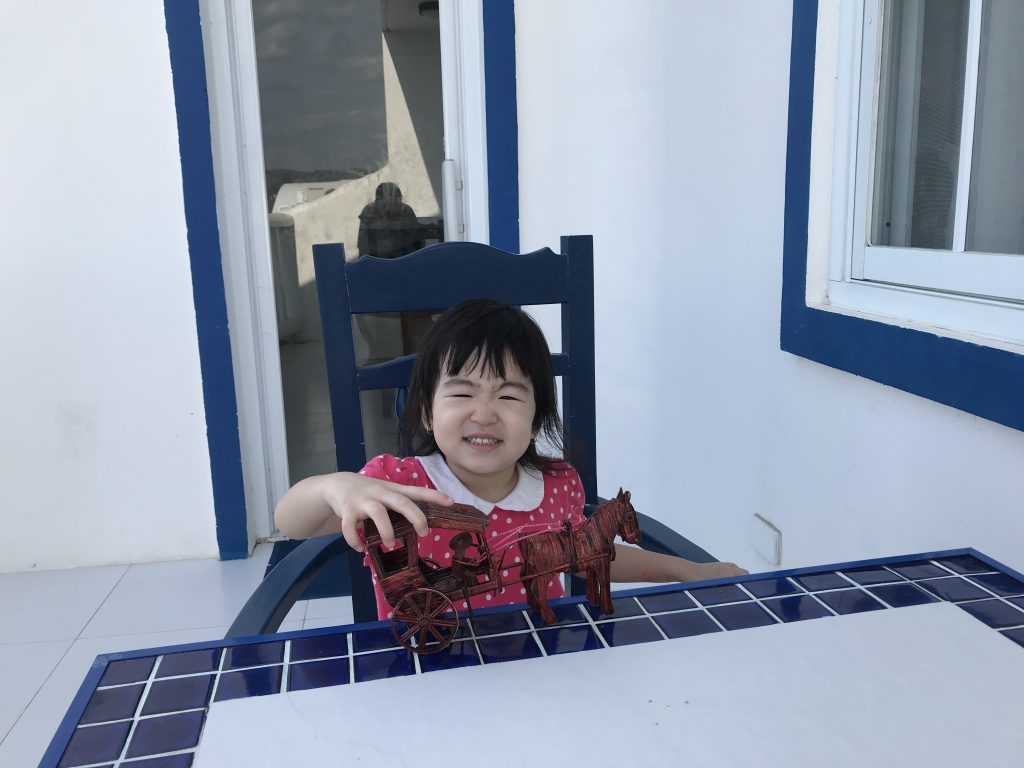 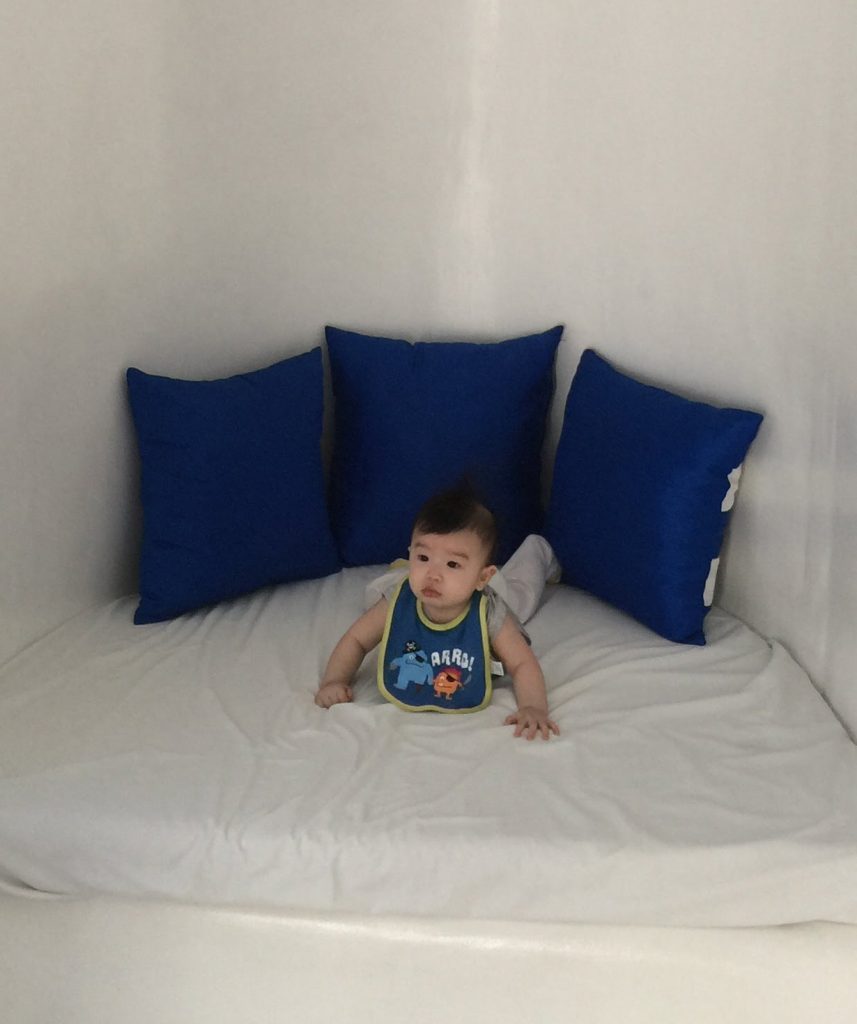 The resort had 2 medium size pools. To access the beach, we had to ride their shuttle to one of their hotels, the Vitalis White Sands. We went there after checking in at our room and getting a little rest. Sadly, though, the beach wasn’t that nice. We saw several cigarette butts and candy wrappers in the sand, and there were a lot of seaweeds along the shoreline. Nevertheless, Light had a fun time playing on the sand. 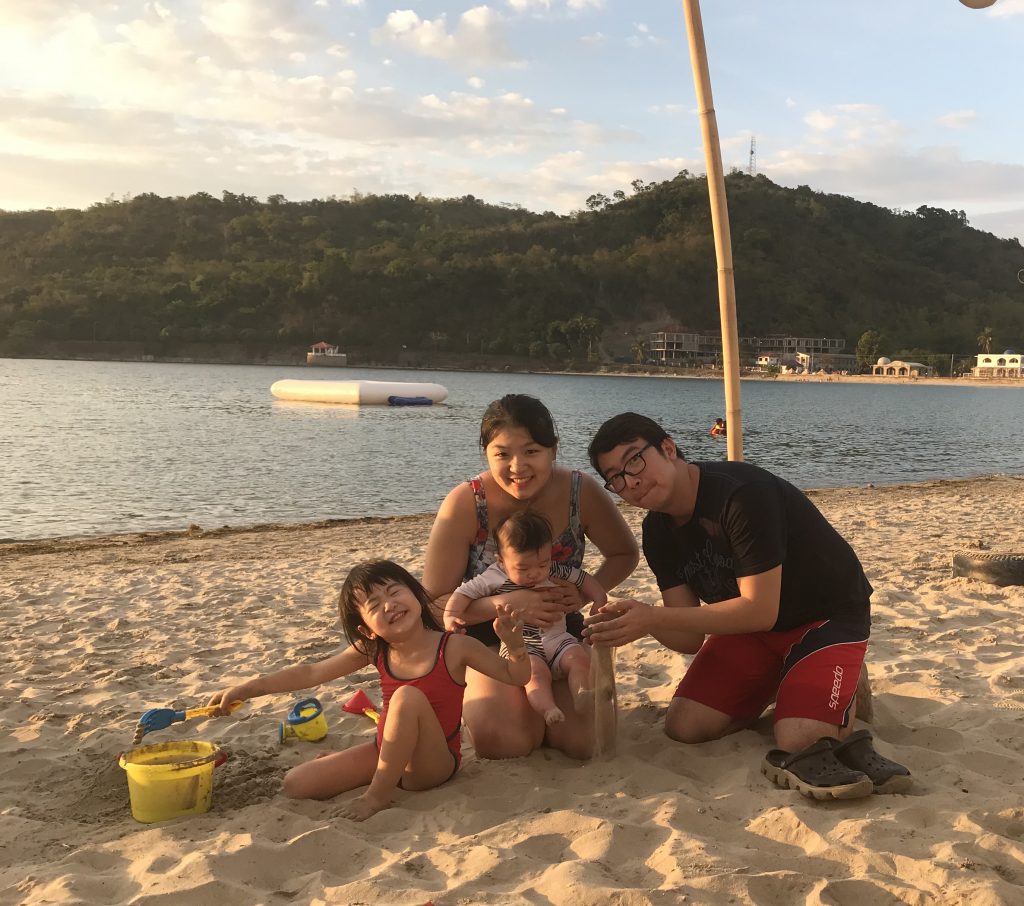 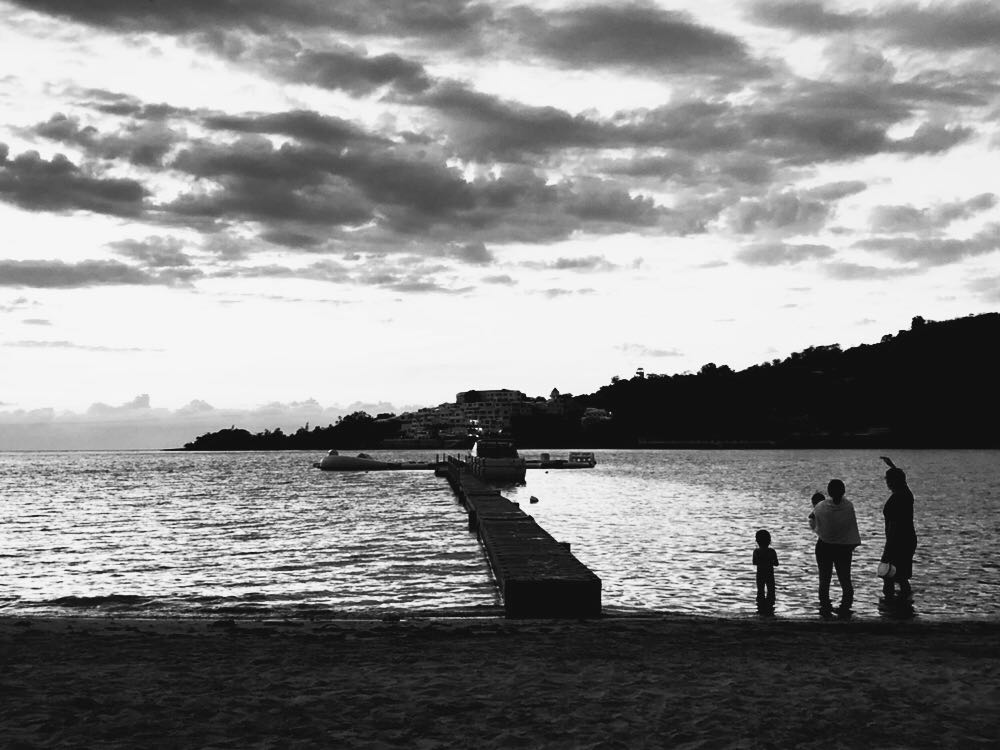 The food at Vitalis Villa was okay. There were a couple of dishes that were good. There were also some that were just bad. Overall though, it was okay. Especially since we went there on a Sunday-Monday, and there were not a lot of guests. They still had enough food.

It was a very relaxing stay. Just what we needed after the tiring 2 days. We probably wouldn’t be coming back here, though, because it’s just too far away from Manila. I recently saw a Santorini inspired resort in Batangas. I mean I just wanted to see the place because it was so beautiful in the pictures. 🙂

I just have to mention here how very nice and courteous the people of Ilocos were. So welcoming. 🙂

Day 4 Back To Reality

We headed back to Manila around 1 pm on a Monday. Surprisingly, I felt it was faster going back than it was heading to Ilocos. It was more tiring though because both kids were mostly awake. There were a few fusses and a couple of stop overs because, again, of Siris. We arrived at our house around 9:30 in the evening, which wasn’t that bad I think.

I would say, there’s really nothing much to do in Ilocos for kids. The long travel just wasn’t worth it. Perhaps it’s one of those places you would go only once, just to check it out. But Light had fun. And it was a nice break for the adults.